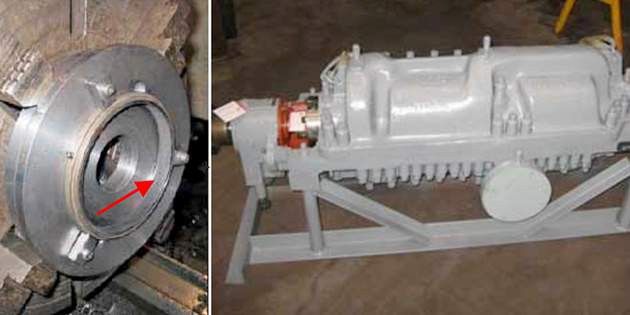 A large hydrocarbon processing facility in Central Alberta was using a nine-stage horizontally split-between-bearings pump with 12-chrome stationary and rotating wear components to feed water to a boiler.

After several costly seizure incidents, the operator increased clearance between rotating and stationary wear components. However, the resulting reduction in boiler pumps efficiency required running the facility’s backup pump in parallel with the primary unit whenever the plant was operating at full capacity.

The facility’s engineers wanted to find a way to eliminate running a second pump because it greatly increased operating cost, and they needed to avoid a recurrence of seizure incidents previously encountered with the primary pump.

The operator installed Vespel® CR-6100 parts as stationary wear components in boiler pumps. Clearance is about half that of the original design specifications of 0.016 in. (0.406 mm) for metal parts. Hydro Scotford Inc., of Ft. Saskatchewan, Alberta, engineered the conversion and provided the parts.

Sharply lower operating cost and increased efficiency. Increased efficiency achieved with the clearance reduction enabled by Vespel® CR-6100 parts made it possible to operate at full capacity with a single pump instead of two. The elimination of the second pump saved $100,000 per year in operating cost. In addition, the pump now draws 5% less amperage, saving $6200 annually based on a typical North American power cost of $0.06/kWh.

No seizures, no repair costs to date. As of January 2011, the pump has operated for three and a half years without a single seizure failure. That has saved $65,000 in annual repair costs that would have been needed with metal wear components, adding up to nearly $200,000 in three years.

Reduced vibration. With Vespel® CR-6100 parts, the pump runs with much less vibration than previously, this is as predicted by the Lomakin effect where fluid damping forces increase as running clearances are decreased.

Want to talk to an expert?